One of the most noticeable people in the field of solidarity has left us: Gino Strada, founder of the NGO Emergency in 1994, which guaranteed free medical and surgical care to the victims of wars and poverty, and a critical spirit against the corruption of Italian health, and the EU arms trade policy.

Gino Strada graduated in Medicine and Surgery at the State University of Milan in 1978, at the age of 30, and specialized in emergency surgery. From 1988 he worked with the Red Cross to assist the war wounded. Then in 1994, together with his wife Teresa Sarti, Strada founded the NGO Emergency, which in 2006 was recognized as a partner of the United Nations. From 2015 he became a member of the Economic and Social Council of the United Nations (ECOSOC) and, in 2018, an official partner of the European Union Civil Protection and Humanitarian Aid.

In 1999 he published the book Green Parrots (Pappagalli verdi). He recounts there the stories of injured and mutilated adults and children, whom he tended as a civilian war surgeon during the wars in Iraq, Pakistan, Rwanda, Afghanistan, Peru, Kurdistan, Ethiopia, Angola, Cambodia, ex-Yugoslavia, and Djibouti.

Gino Strada was a determined and moral person, a teacher of humanity and a tireless peace activist. He devoted his life to realizing the dream of a world without wars, following in Einstein’s steps, who claimed that “war cannot be humanized, it can only be abolished”.

If one of us, any human being, is suffering like a dog right now, is sick or hungry, it affects us all. It must concern us all, because ignoring human suffering is always an act of violence, and one of the most cowardly.

I believe that war is something that represents the greatest shame of humanity. And I think that the human brain must develop to the point of rejecting this tool as inhuman. 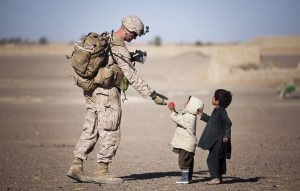